Part Two of the History of Guide Dog or Seeing Dog use by Neil Ewart, Trustee, The Seeing Dogs Alliance

In Part One of my blog, I wrote about the history of guide dogs in the 1800’s.  Let’s now look at how things changed thereafter…

A key point was the exemption from the excise licence granted by Parliament in Great Britain to shepherds’ dogs and those kept by the blind as guides, which suggests the number of dogs accepted as being guides must have been quite high.

It must be assumed that these dogs would act as very simple guides and companions; whether most were actually trained in any way is open to conjecture.

However, there are records of a system of training guide dogs which was published in Vienna around 1819.  There is also another book from the same area published a little earlier in 1813 which refers to well-trained dogs being used prior to 1780 by blind persons of the Quinze-Vingst hospital in Paris.  In fact, there was a painting hanging in the Louvre depicting these dogs.

There are also records of a blind Viennese named Joseph Reisinger who at the end of the 18th century trained a Spitz to guide him.  It is reported that he made such a good job of it that many accused him of feigning his blindness.  He then went on to train two more dogs, one of which was a Poodle.  Unfortunately, there is no evidence that any of his methods were ever developed.

Speculating how an individual may have trained his dog should take into account there is a possibility the handler was partially blind but who knows?

The Director of the Institute for the Blind in Vienna stated that the Poodle and the Shepherd dog made the best guides.  He even went on to describe a method of using dogs in which a stick attached to the dog’s collar and was then held in the left hand.  This Director was named Klein and he continues, ‘The rigid stick must run through a loose brace around the body of the dog, so that a side movement of the dog is fully felt in the hands of the blind person.  The use of a guiding stick has the advantage that the blind person notices at once when the dog is standing still, which is not true when he is led by a strap’.

His next observations sound very familiar to us in the twenty first century:-

‘The training of a dog, at least in the beginning, must be done by a sighted person.  One leads him, many times on the same road and drills him, particular attention being paid to places where through turning, through slow pace, through standing still, or through other movements which might be useful to the blind in situations such as the turning of the street and in the avoidance of obstacles that lie ahead-through all this the dog will be made alert to various kinds of dangerous situations.  Then the blind person takes the dog in hand himself and goes with him, at first on the same road with which he is already acquainted, in order to become accustomed to the movements and signals of the animal.  It is obvious that from now on the dog will be fed and cared for by the blind person himself, in order to arrive at a mutual understanding and to establish a true and faithful attachment with the leader dog.

It is worth reminding ourselves that this was written at the end of the 18th century and the principles are certainly still relevant today.  We do not know how many times his observations were ever applied, if at all. However, they appear to be based on very sound theory. However, things did not necessarily always go to plan!  There is a 19th century French lithograph of the fat blind fiddler (no political correctness in those days!) by the artist Charlet.  This shows the unfortunate itinerant musician being led into a ditch by the dog, thus showing the hopefully occasional, failures by these dogs.  At the same time showing that the sight of dogs leading the blind was a common in France. Under the lithograph is a poem which translates:-

‘The blind man followed his trusted dog into deep waters.

Thus man is destroyed by the so-called friends whom he trusts.’

Unsurprisingly, not only are some of these dogs pictured as guides, but also as aids to begging holding in their mouths a money dish.  This probably would have required some training although many would have taught themselves to pick up and carry their empty feeding pans. 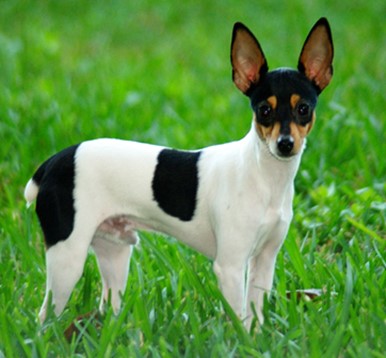 In the very early twentieth century an American vet, Leon Whitney, reported seeing three blind men who were led by American fox terriers at the end of a cane.

In the very early twentieth century an American vet, Leon Whitney, reported seeing three blind men who were led by American fox terriers at the end of a cane. He felt that the smaller dog on a cane was far more effective than a larger dog at the side.  He continued that nobody tripped over the cane and everyone saw the little white dog. It does seem that many dogs used as guides up to this date were often quite small.

When the systematic training of guide dogs on a large scale commenced during World War One bigger dogs were used.  Probably the choice may have been influenced as much by what breeds were available in sufficient numbers.  Nowadays, it remains standard policy to use medium sized breeds.  Too small and the dog is difficult to follow, too large can make access to various locations difficult.  Also, speed and length of gait are both issues.  Most guide dog owners will prefer a moderate or steady pace.

In 1916 the German Red Cross Ambulance Dogs Association, whose president was Dr Gerhard Stalling, started training some of the Association’s ambulance dogs as guides for the blind. The first to be handed over to a soldier blinded in action named Paul Freyen, in October 1916.

Incredibly, a year later the Association was able claim that 100 guide dogs were in service, and in 1919 that 539 war-blinded men had been provided with guides. By 1922 classes had been extended to include civilians.

Schools were opened throughout the world.  Training methods have been developed and adapted with different breeds tried and, in most cases, discounted. However, it is undoubtedly true to believe that the basics of training and, in a small way, selection were laid down hundreds of years ago and many of the pioneers’ first observations still hold true today.  Until next time!